Looking back on march, it’s been an intense month that has pushed Lexi and myself to be brave, keep going and hopefully to become the best versions of ourselves. Our time in Cambodia has proven to be more emotionally driven than we ever could have imagined; it is the stability of having a dependable relationship with Lexi, the vast and powerful love we feel for the children and the continual support we receive from home that carries us through and ensures I am (mostly) still laughing.

The month began with my decline into old age when it was my (really lovely) 19th birthday. Soon afterwards, we were visited by Lexi’s mum and aunt, and it was nice to show them some of what has become ‘Our Cambodia’ and especially to introduce them to our rather large and crazy group home family. Heloise, our desk officer from Project Trust who looks after us from afar, then also came to Kampong Chhnang. The last time we saw her was on our training course before we started the year, so it was interesting for both us and her to see how much we have since developed. She picked up on the improvement of my self-confidence which I have been noticing too, and also assured Lexi and me that we are doing a great job- which sometimes is all we need to hear!

The rest of March has been busy, mostly fulfilling and dare I say it… Going quickly. Nevertheless, it has been punctuated by ups and downs, and made 10 times more stressful because of the aggressive heat. It is hard to keep your cool when you are hanging out the laundry in 37 degree heat and a child decides that it would be absolutely hilarious to run away with the basket. You will be pleased to hear that group home 5 a.m. Aerobics has been initiated. We weren’t so pleased when we were woken up by hardcore Cambodian techno music blasting right outside our door in the early hours, but it’s fun and one little girl enjoys correcting me on every stretch. It’s important for the children to exercise as they are taking ARV medication and some are still under nourished.

The older childrens’ move to the halfway house in Phnom Penh to begin the next stage of their lives is getting closer. At the moment, we are balancing trying to spend time with them alongside coming together with all the group home staff in a mass effort to get them to come to English lessons (it’s serious business: no show means no pocket money).

Weekly meetings have been instigated at group home too; some Magna staff, the caregivers and the barang (us) spend time problem solving and planning the next week. We spend much of the meeting harbouring puzzled faces, trying to pick up as many Khmer words as possible, but currently we are very happy that this is happening.

One of my older classes was previously getting to the point where I was struggling to maintain discipline, with the children that were messing about ruining it for the whole class. I gave it some thought and eventually decided to split them up into paired or individual classes. As my mum said to me, as long as I am trying my best, my best is all that I can give. But so far, the result has been more than I could have hoped for. In particular, one sixteen year old boy that I perhaps wrongly used to perceive as apathetic and limited in ability is now, away from distraction, completely excelling at English. Additionally, the opportunity to do conversational classes with those who are keen for it has been pretty inspiring. Once you start them on a topic, words bubble from them and it makes me so proud to see willingness in learning new vocabulary and happiness when impressive sentences are formed.

Even if the children sometimes do things that show that they don’t appreciate or need us, I am starting to discover that I need them. Their emerging moral compasses, innocence, goodnight kisses and smiling faces will never be lost on us, and act as a reminder that they are in fact only children searching for affection and their place in the world.

An older girl suddenly left group home last week, and both Lexi and myself found ourselves feeling very moved. Before she left, she gave me a hug and with sincerity whispered into my ear: ‘thank you for being my teacher English’. Now it’s April, and yesterday I felt the first droplets of rain on my face since the wet season last October. It feels a bit of an accomplishment that so much time has passed, and that we are almost completing the full circle. 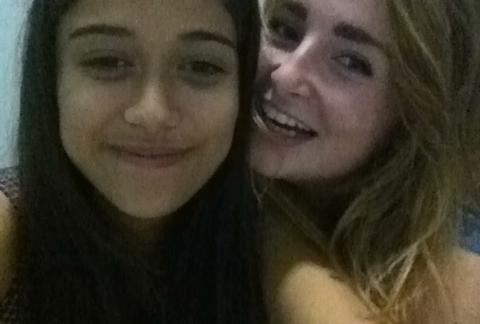